The International Relations program has been following the efforts of the President’s Anti-Racism Working Group and their May 2020 final report. Please access the report here. We look forward to implementing the changes and recommendations of the President’s Anti-Racism Working Group moving forward. The IR program is committed to anti-racism program review, improved communication and accountability following the report’s guidelines. If you have concerns or would like to discuss these or other issues further, please contact the IR director at dbousfie@uwo.ca .

The International Relations Program is delighted to announce its inaugural Ambassador-in-Residence: Guillermo Rishchynski.

Mr. Rishchynski has had a distinguished career in Canadian diplomacy, with particular expertise on trade, development and Latin America. Guillermo Rishchynski joined the Department of External Affairs and International Trade in 1983 as an Assistant Trade Commissioner. He has served abroad in Rio de Janeiro, São Paolo, Amman, Melbourne, Jakarta, Chicago and from 1999-2002, as Ambassador to Colombia in Bogatá. In Ottawa, he has served the department as Deputy Director, Latin America and Caribbean Trade Division, and Director, Team Canada Task Force and Inspector General. He joined the Canadian International Development Agency in 2003, serving as Vice-President of the Americas Branch until his appointment as Ambassador to Brazil in 2005. In 2007, he was appointed Ambassador to Mexico and in 2011 he was appointed as Canada’s Ambassador and Permanent Representative to the United Nations. In 2016, Mr. Rishchynski was appointed Executive Director for Canada at the Inter-American Development Bank. He retired from the IABD and the Government of Canada in 2019. He now resides in London, Ontario.

Mr. Rishchynski will be a valuable resource for IR students, advising them about career opportunities as well as meeting with them to discuss global affairs. He is happy to hear from students and can be contacted at: grishch@uwo.ca.

We look forward to introducing you to Mr. Rishchynski at events in 2020-2021.

There have been changes to the International Learning Award eligibility, effective the 2019-20 academic year, which foster greater access for students to finance an international learning experience. These changes include:

Congratulations to the 2018-2019 graduating IR class! Their final policy report is available here. 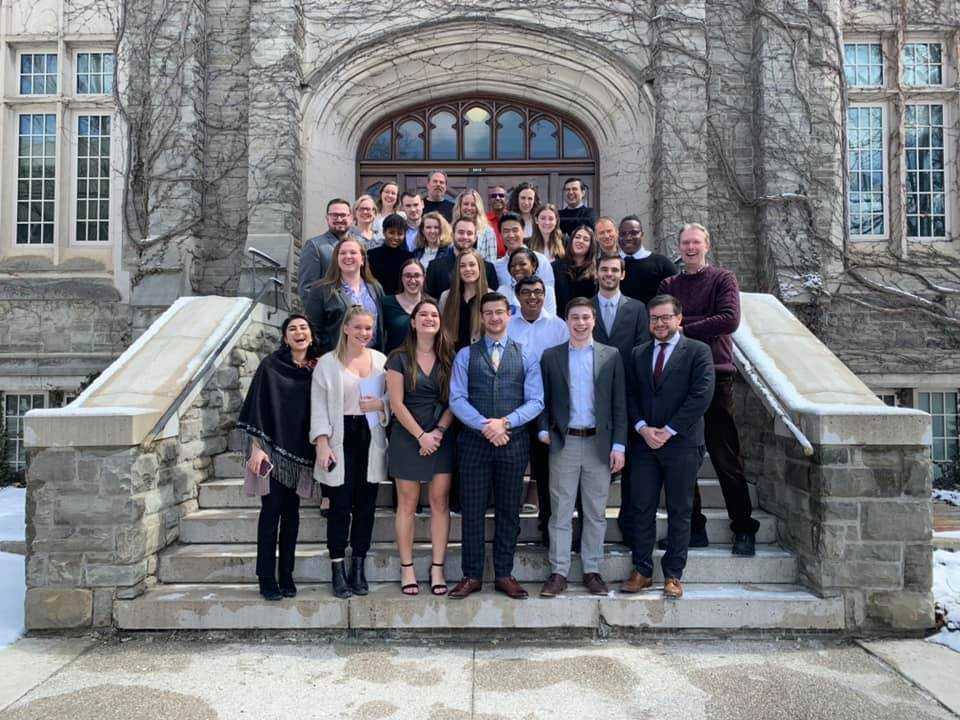 Nicholas Schivao and Aaron Joshua Pinto, both graduates of the International Relations program were highlighted by OpenCanada as Canada's future foreign policymakers for 2018. Click the links above for the details.

Study Abroad Opportunity in May

Western University now has a partnership with the University of Windsor, offering students the opportunity to participate in Windsor's EU Study Abroad Program. This program is entering its 10th consecutive year. Over 180 students have participated in the program since its creation in 2009. Information on the course may be found here.

For more information see the video below

Congratulations to IR students at the Undergraduate Essay Awards

Congratulations to the 3 IR students who attended the undergraduate essay award conference in Dublin in October. Allyson Fox, Andrea Burke and Lauren Paparousis all received the award. Their award winning papers are below.

Daisy, a graduate of the IR program (2016) has had her Undergraduate History Thesis, "The Social Stratification of Ethno-religious Conflict", accepted for publication in the 2016-2017 issue of The Yale Historical Review. Congratulations Daisy! For more information on the publication, please visit: http://historicalreview.yale.edu/

Aaron Pinto (IR 2014) attended the Queen's Young Leaders award ceremony at Buckingham Palace where he received his award from Queen Elizabeth. For more information on the ceremony and Aaron's achievements, please read these articles written at Toronto Star and CTV News.

Congratulations to Aaron Pinto (IR 2014) who has been selected as a Queen’s Young Leader for Canada in 2014!  This award acknowledges the exceptional work of young people (aged 18-29) who are playing leadership roles in their communities and transforming people’s lives.  Aaron is the co-founder of a project to help people living below the breadline.  The project delivers food hampers to migrants, the elderly and survivors of abuse.  Aaron will be traveling to London in the summer to receive his award from the Queen.  For more information on the Queen’s Young Leaders Award, please go to: http://www.queensyoungleaders.com/#

Congratulations to Surer Mohamed: Highly Commended at the Undergraduate Awards

The Undergraduate Awards is a pan-academic international awards program that rewards students for innovative approaches to their subject area. Submissions are judged by academics in each subject field.  Students whose papers win or are highly commended represent ‘the most creative and nuanced arguments and ideas coming out at the undergraduate level internationally’.  Surer’s essay challenged the trope of the African "tribalism" as singularly responsible for ethnicized political conflicts in Sub-Saharan Africa.  In the paper, she analyzed the limitations of this conception of ethnicized conflict, and attempted to move towards a more nuanced understanding which includes the actions of individual leaders, the structures of African states and exacerbating international factors.  Surer’s essay received a highly commended distinction in the Politics and International Relations Category.  She will be attending the UA Global Summit in Ireland in November 2014.